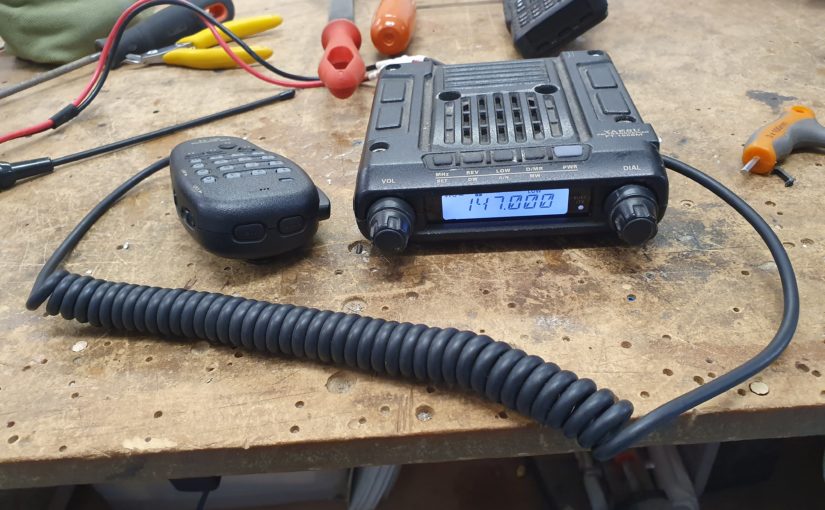 A few years ago I picked up a Yaesu FT-1500m 50w VHF transceiver for a small amount, it was in pretty bad shape when I got it so it was pretty cheap.

I ordered a new microphone right away but because the previous owner super glued the old one in, I was never able to replace it.

I had trouble finding exactly the correct 6p6c Jack to replace the ruined one too.

I checked many places online, many stores in Singapore sim Lim, and many in Tokyo akihabara, until I finally found one that appeared to be close enough to use!

The new one wasn’t a perfect fit, I had to shave the corner of it down a bit, and drill out a small part of the radio housing to accommodate it, as it sits much more inside the radio than the stock one, but the pinout and height of the jack itself work ok. They’re logically correct too, despite being upside down compared to the stock.

I removed the stock Jack by carefully cutting away i at it with flush cutters until there was just pins left, then I desoldered those one by one, and cleaned up with some braid.

Installed the new jack, but it had plastic PCB mount rather than metal mounts I could solder. I decided to add some copper wire for a little bit of extra mechanical support. I added some liquid electrical tape to attach the wire to the jack.

After that was all done, I was more or less finished with what I can do!

I replaced the manky old M5 bolts with clean new ones, and will give the unit a general cleanup!

Unfortunately the rubber buttons are beginning to disintegrate, so I’ll have to figure out something to do there.. I cannot locate a replacement for those :/

The volume potentiometer has seen better days but still functions perfectly. But I may replace it in the near future.