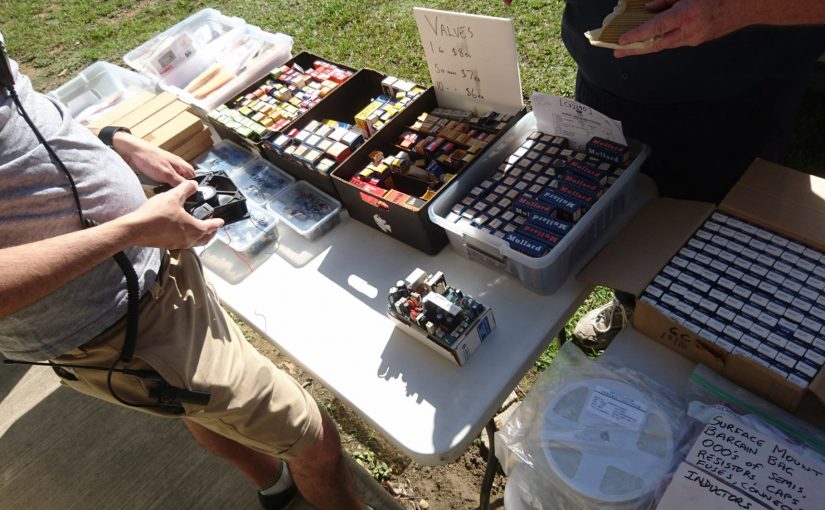 This morning I went to the ARNSW Trash and Treasure event!

It’s pretty much a small hamfest!

This is the second time I’ve been to it, it was a bit smaller this time but there was still plenty of stuff.

There was heaps of oscilloscopes this time, with many costing a mere $10-30!!

There was even this single channel scope with a GIANT display:

The first thing I spied when I was walking around was a small block of foam with 12 nixie tubes on it, it was sitting with a bunch of other vintage tubes.

I’m a huge fan of nixie tubes so I went straight for my wallet to make sure they were safely mine! Haha
The list price was $120 but I talked it down to $60 for the lot.

I also picked up a few random metal project boxes that… Seemed to be constructed into things.

Only one of them was labelled so the other two were real mystery boxes !

Nobody was able to tell me what they were, but I see huge potential in rebuilding them into something else.
I’m particularly fond of the one with the front handles!!

When I was home I opened up the two unknown ones to find them pretty much empty shells.

The perfect playground for whatever I turn them into.

I was also lucky enough to pick up some variable capacitors, which I’ve been chasing for a while. I don’t yet know the value of what I grabbed but it’s certainly closer to what I need than nothing !

I want to use it when building a magnetic loop HF antenna.

I also picked up a rather nice dial with an easily configurable scale. You just cut out and slide it in.

Overall it was a pretty successful morning !

I spent significantly less than I expected and came home with some pretty nice treasure!

So i’ve wanted to try this one for a while, can I install a desktop GPU into a server, and pass it through to a VM for gaming on?

Well my server has 128GB RAM, 4 SSDs RAIDed together, and 16 logical processors, so like, why not add a GPU and play some games on it!?

I picked up a GT740 second hand on a buy sell facebook group, and i’ve spun up a VM running Windows 10 x64 to install steam on.

I test fit the GPU into my Dell R210, and it doesnt really fit with the fan on, so removing the fan so its just a heatsink lets it fit, but im not sure if the airflow inside will be enough to cool it down? hopefully.

Ill power it down shortly and test fit it.

OK, I had to cut the end off one of the PCIE slots as the R610 only had x8 slots, but that wasn’t too hard, just some very careful dremel work then a small file to clean it up.

I also had to cut off the little lock part of the GPU, the part at the end of the connector, as the R610 raiser card has a large component there (intrusion detection switch maybe?)

With those two parts removed it fits in well.

The system is taking a *very* long time to boot… but it is booting.

the video is coming from the onboard graphics though.

Okay it booted and detected the GPU correctly, but looks like getting NVidia pci-e passthrough is a pain in the ass…. Might look into an AMD card at some point instead. Until then Ill mark this as a maybe!