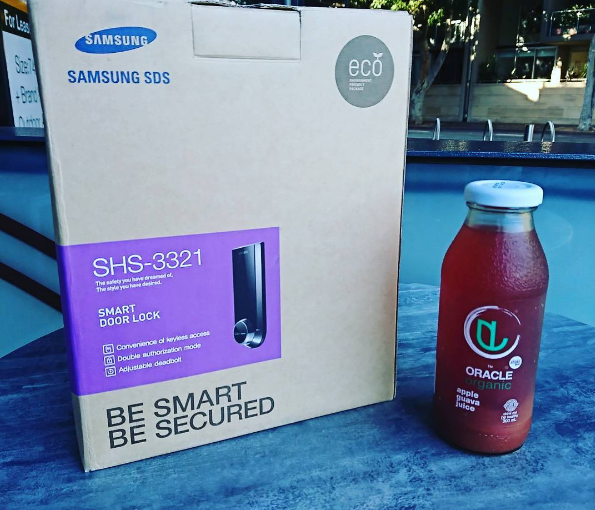 In today’s post we are going to be exploring my new Samsung Ezon SHS-3321 Smart Door Lock Deadbolt.

This is a dead bolt mortise style lock, its main feature is that it supports NFC and PIN authentication to unlock rather than a traditional key system.

Now, this will work great with my NFC implant, but what if I wanted to allow someone else into my place?

Sure, I could tell them the PIN code, but that seems kinda silly to me, its convenient but what if I only wanted to grant them entry this one time? if I give them the PIN they could come back later that day and enter.

So I was looking into ways of connecting it to the internet so that I could trigger the lock from my phone.

From past experience, I was aware that Samsung does actually have a remote control module available for some door locks, such as the SHS-6020, however it seems this wasn’t compatible with my lock.

Poking around inside the lock I have located a connector that is not referenced anywhere in the manual, and is labelled as ‘Home Auto’ on the silk screen.

I searched around a bit online for it and found a reference in a whirlpool post over here: http://forums.whirlpool.net.au/archive/1312681

One of the users suggests it could be current based, which instantly lit a bulb in my head!

So I set up the lock on my desk and got it responding to my NFC implant, everything was working great.

I tricked the lock that the door was closed by bringing the magnet near the reed switch sensor, and locked it with the lock button.

I then used a screwdriver to short the two pins together by just poking them. I was pleased to hear a nice chirp and the lock unlocked!

This opens a whole new world of opportunity.

I can now hook up the lock similarly to how I have hooked up the intercom, and trigger it via HTTP.

This is not the most secure method, so I will look into ways of making it more secure before I actually implement this.

but the important thing is, its incredibly easy to interface the lock in this way.

The next thing to do from here would be poke around on the circuit to see if theres a status pin that outputs if the lock is in the locked or unlocked state.