So I just had an idea, see this:

Maybe, just maybe, this would work.

you’ll need an antenna tuner because reasons, and probably extra strain relief, but think about it.

you could keep it in a bag, and go off camping or to a field day, forgot your cables?
no prob! head to a nearby electronics store and grab some ethernet of the length you need!

where the cat5 jacks connect to the pl-259, all wires are used in the cat5.

JUST DONT GO PLUGGING THE OTHER END INTO ANYTHING HAHAA 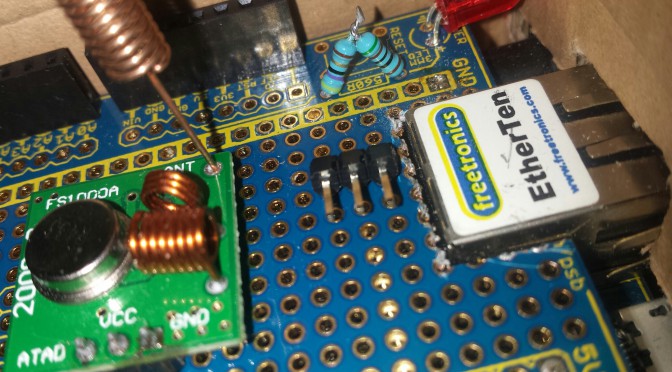 Update: This project died when I got a job and can afford off the shelf automation stuff :’)

This project is basically me wanting to be able to automate my house but not wanting to fork over heaps of money for pre made systems.

I’m a bit lazy with details so if there’s any questions you have please comment below!

Ok, so it just occured to me that I could have bent the antenna down flat so that I wouldn’t have had to make any holes….

I got around to making a few changes, I’ll let the images do the talking for me:

A few notable things, white LED on ParaShield (I’m calling it that now) has been replaced with a less bright red one. Transmitter repositioned and wired a little nicer, Ethernet hole cut (Stanley knife, metal cutters and pliers).
Proper helical antenna added to both units, Rx unit now has single channel relay.
Also, I shoved it all in a box and added a 12v fan running off 5v from the ParaShield (may add fan controls/monitoring later) so nothing goes wrong with summertime here.
I’m just waiting for the other 433mhz things to add a manual light switch, and the infrared control unit. Codes all ready but need the RF receiver D:

Also, on the app side of things,
I added an all on/off section so when this projects complete, I’ll be able to stand out the front of my house, say something awesome, hit a button, and the whole house lights up or goes dark 😀 XD

I remember reading about this a while ago but didn’t care for arduino or anything much then.
But now I’m looking at this and seeing
This+Relay+PSU = self contained without need for base controller!
Plus, did I mention ITS FOUR FREAKING DOLLARS
how could I NOT order two!

When they arrive I’ll have a play around see if I can figure out how to control them 🙂
Will post here when I do!
In other news: I ordered proper 433mhz antennas for the things, and found the PS move squigy ball.
Will get a box soon for it all haha,
I’m also preparing some LED strip on the front veranda to be controlled by my UI. And I’m developing an android app (will design a tablet version later)
Using Tasker app factory!
Early screenshot attached!

Newer update:
I found chunks of a broken PlayStation move controller, for now I’ve soldered some resistor legs to the rgb led breakout board, and have the rgb led on the base station for reasons,

Hopefully further down the track I’ll be able to turn on a mood light fading through, (although once it starts fading how do I stop it…?)

Or even notifications for things!

It also acts as a status light,
On sending an on command it flashes green twice, the off command has two red flashes.
An unused but implemented command gives three orange flashes.

Also I hope to find the sphere from the PS move. And to mount the led on the proto shield, maybe move the rf transmitter to make a cut out for the Ethernet jack,
And then try my luck at designing a special case for it all.
Either adapting an etherten case, or making a shitty one from scratch.
YouTube video showing on/off light
Signal light: http://youtu.be/ejXlYe17N8U

New update: I got it working again 🙂
Not sure what was wrong but I rewrote the code and now it works hahaha

Its a bit slow probably because of the speed I have the radios set to, but oh well doesn’t matter.
I soldered everything together into a little clump, minimising wires, and made a shield for the transmitter so it sits neatly atop the etherten.

Also. Found a leostick under my bed but I’m having issues uploading code to it. Going to use it to make that light switch if I get it working 😀

LOOK AT ME I BROKE IT SOMEHOW
Went for a trip to jaycar and bought some supplies, and a smaller soldering iron
When I got home I took down the roof unit, attached shorter cables so it would fit in the little box, and put it back together,
But just my luck, it’s not working now!

I send commands but it doesn’t trigger the relay….

I’ll also add some code and an LED that blinks when it gets a command….
Oh, and maybe the code to light that emergency light if a pin goes low?

Or to a proto shield….

The current state of the project consists of an arduino pro mini clone, that listens on the 433mhz band for a command, and turns on a relay depending on the command.

There is a Freetronics Etherten acting as base station, connected to my LAN, and a 433mhz transmitter, this responds to http requests by sending various commands to the ceiling unit.

Its easy to add additional remote units and set up controls for them, which I plan on doing  when I get blinds for my windows.

I also have a raspberry pi running Rasbian that listens for a button press, which is wired to our 20 year old retro doorbell, when the button is pushed the Pi sends a pushover notification to my phone/pebble, as well as plays a doorbell sound throughout the house  directly connected speakers.

I’m also going to be setting up Asterix or something on this to add Cisco VoIP phones around the house.

I have plans for an analog control panel too, that has physical buttons connected to an arduino, to send commands to the various other arduino around the house.

For example, a light control panel, push one button to send off commands to all lights in the house, or indivuaul etc.

I also will be adding a sensor to the mailbox, probably solar powered, that sends a command in to the house when mail goes in, either emailing me, maybe a photo?
Sending my pebble/phone a notification, or just lighting up an LED on the control panel to indicate new mail!